A collaborative work conducted by researchers at the Geodynamics Research Center (GRC) and Institut de Minéralogie, de Physique des Matériaux et de Cosmochimie (IMPMC) suggest the existence of low shear seismic velocity regions between 150 and 350 km depth in Mars mantle. The experimental results presented in this study are consistent with recent observations from the InSight mission and could give important clues on Mars’ mantle mineralogy and internal structure.(Steeve Gréaux)
read more 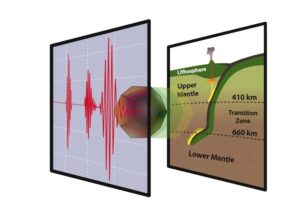 Researchers at Ehime University have reported the sound velocity of MgSiO3 Majorite garnet up to the pressure of 18 Gigapascals and temperature up to 2,000 Kelvins. Their results lead to understanding of the mineral composition of the Earth’s mantle transition zone (MTZ), which has not been fully elucidated yet. This study suggests that a mechanical mixture of slab and mantle rocks, rather than equilibrated rocks, is more likely to explain seismological observations throughout the MTZ.(Steeve Gréaux)
read more

How were the carbon contents in terrestrial and lunar mantles established? (June 1, 2021)

A Schematic image of the Earth’s internal structure

Carbon degassed from planetary mantles by volcanic activity plays an important role in the planetary surface environment. However, how the carbon content in the Earth’s mantle was established is still poorly understood. Here we show that the mantle of planetary embryos may have been nearly saturated with carbon by new high-pressure experiments and pointed out that the carbon solubility of magma is very consistent with the estimated carbon contents in terrestrial and lunar mantles. (Hideharu Kuwahara)
read more

A deep reservoir of primordial helium in the Earth (May 2, 2021)

A stable isotope of helium, 3He, was produced by the Big Bang and a remnant of the solar nebula.
3He is included in ocean island basalts, such as in Hawaiian volcanos, indicating it has been stored somewhere in the deep Earth and carried up to the surface in upwelling plumes.
New computer simulations demonstrate that even in small amounts, helium can be dissolved in liquid iron at ultrahigh-pressure conditions, suggesting that there is a reservoir in the Earth’s core. (Taku Tsuchiya)
read more

Transportation of water into the deep Earth by Al-phase D (Dec.1, 2020)

Researchers at Ehime University have recently measured the propagation speed of ultrasonic waves in an aluminum-rich hydrous mineral called Al-phase D at pressure conditions relevant to the Earth’s deep mantle. Their results suggest that seismic shear anomalies observed locally beneath subduction zones may reveal the presence of hydrous minerals in the uppermost lower mantle, which would have important implications for the Earth’s interior because hydrogen affects considerably the physical and chemical properties of mantle minerals. (Steeve Gréaux)
read more

Is the Earth’s inner core oscillating and translating anomalously? (Apr.14, 2020)

A theoretical mineral physics approach based on the ab initio methods was adopted to determine the viscosity of hexagonal, close-packed iron at the extreme pressures and temperatures corresponding to the Earth’s inner core. The results are found to deny geophysical observations of large fluctuations in the inner core rotation rate. The obtained viscosity also rules out inner core translation and provides support that the dynamics of the inner core may be governed by solid-state convection. (Sebastian Ritterbex)
read more

Heat transport property at the lowermost part of the Earth’s mantle (Feb.13, 2020)

Lattice thermal conductivities of MgSiO3 bridgmanite and postperovskite (PPv) phases under the Earth’s deepest mantle conditions were determined by quantum mechanical computer simulations. We found a substantial increase in the conductivity associated with the phase change. This indicates that the PPv phase boundary is the boundary not only of the mineralogy but also the thermal conductivity. The effect of anisotropy on the conductivity of PPv in the heat transport properties at the lowermost mantle was also found to be minor.(Haruhiko Dekura)
read more

The crystal structure of ε-AlOOH

A new hydrous phase, ε-AlOOH, was observed to be stable at pressures above ~200 GPa. The stability of ε-AlOOH at extremely high pressures may affect the modelling results of the internal structure and deep water circulation of some extra-solar planets, such as terrestrial super-Earths, because the hydroxide may store water in these regions.(Masayuki Nishi)
read more

The electron micrograph of the recovered sample

A magma ocean existing during the core formation is thought to have been highly depleted in carbon due to its high-siderophile (iron loving) behavior. Thus, most of the carbon forming the atmosphere and life on Earth may have been delivered by a carbon-rich embryo after the core formation. However, a new high-pressure experiment has shown that previous studies may have overestimated the amount of carbon partitioning to the core. (Hideharu Kuwahara)
read more

Hydrous minerals in the Earth’s interior

Phase H is a hydrous mineral that is considered to be an important carrier of water into deep Earth. We determined the dissociation condition of phase H by a theoretical calculation based on quantum mechanics. Phase H decomposes at approximately 60 GPa at 1000 K. This indicates that the transportation of water by phase H may be terminated at a depth of approximately 1,500 km in the middle of the lower mantle. (Jun Tsuchiya)
read more

The electron micrograph of the recovered sample

It is believed that terrestrial planets were made from chondrites. However, geochemical observations have shown that the abundance pattern of volatile elements, such as F and Cl in the Earth is inconsistent with chondrites. New high-pressure experiments suggest that F and Cl fractionation during magma ocean crystallization could explain the non-chondritic Earth’s F/Cl ratio. (Hideharu Kuwahara)
read more

Laboratory experiments at extreme pressures and temperatures lead to precise measurements of the sound velocity of CaSiO3 perovskite which is one of the important constituent minerals in the Earth’s mantle. The measurements suggested the accumulation of the subducted oceanic crust beneath the 660 km discontinuity. (Steeve Gréaux)
read more
Geodynamics Research Center