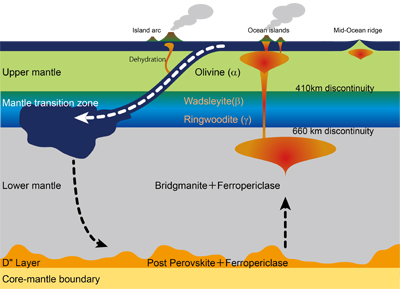 It is often called that the Earth is a water planet. Because water exists in the Earth, life was born and the green (plants) rich environment was achieved. On the other hand, it has been clarified that water is also playing the important role for the process of the formation and the evolution in the Earth. Water lowers the melting temperatures of the deep Earth minerals and enhances the magma generation. It is also clarified that the chemical compositions and the physical properties of the generated magmas are much different between with and without water. In addition, it has been clarified that water can be included in deep Earth minerals in some high pressure and temperature conditions (high-pressure hydrous mineral), and the minerals can transport water to deep Earth interiors. A part of 410-660 km of deep Earth is called “mantle transition zone”, and it is a possibility that a significant amount of water (wt% order) exists in the mantle transition zone as a “water filter” in the Earth. Still more, it is also point out that a possibility that high-pressure hydrous minerals (i.e. water) exists even in deeper lower mantle. In GRC, we have been conducting the above researches by 2 approaches; 1) high pressure experimental research in laboratory and by utilizing synchrotron X-ray and pulse neutron, and experimental research applied for cutting-edge analytical tools, and 2) the numerical calculation and the simulation research by first principle calculation method based on quantum mechanical theory.

The theoretical mineral physics group (TMPG) investigates ultrahigh-pressure behaviors of Earth and planetary materials theoretically and computationally by means of the ab initio quantum mechanical computation method based on the density functional theory. It is now possible to predict several key physical properties of Earth and planetary materials under high-pressure quantitatively with uncertainties that are comparable to or even less than those found in experimental data: high-P,T phase transition and high-pressure crystal structure, high-P,T thermodynamic property including equation of state, elastic constant tensor, deformation property, thermal transport property, and electronic property. The technique is now one of the most promising in order to tightly constrain the thermochemical conditions of the deep Earth. Due to the outstanding outcomes from the TMPG related to discovery of the post-perovskite phase, spin transition, discovery of the highest-pressure phases of SiO2, and hydrous silicate, the lower mantle mineralogy, thermal property in the core-mantle boundary region, etc., the TMPG has received several honors such as the Thomson-Reuters New Hot Paper, the Ministry of Education, Culture, Sports, Science and Technology (MEXT) award, the JSPS prize, and the Japan Association of Mineralogical Sciences Award.

Dynamic properties including rheology, element diffusion, reaction kinetics and acoustic emission, of deep Earth materials are studied based on experimental petrology. In studies of rock rheology, viscosity and development of deformation microstructure are investigated in terms of high-pressure and high-temperature deformation experiments under the deep Earth conditions using D-DIA apparatus, which give constraints on time scale of material transport and flow pattern in the Earth’s deep interior. Through the microstructural observation of recovered samples using various analytical methods, elementary processes which control rheology and diffusion are explored. Recent ongoing research subjects are (1) nature of material transport in the mantle investigated from viscosity measurements on mantle minerals, (2) role of deformation induced lattice-preferred-orientation of mantle minerals in the seismic anisotropy, (3) mechanism of deep-focus earthquakes investigated from acoustic emission measurements on mantle minerals under high stress conditions, and (4) evolution of chemical and physical state of mantle studied from reaction and diffusion experiments. 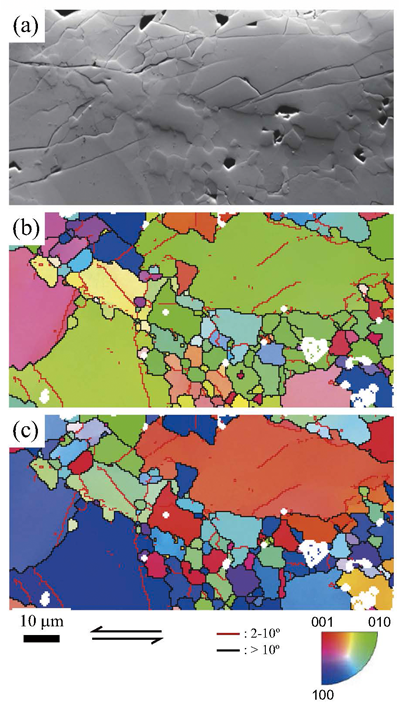 The convective motion in the Earth’s mantle is the ultimate origin of the geological and geophysical phenomena observed at the Earth’s surface, such as seismicity, volcanism and plate tectonics.
To deepen the understanding of the mantle dynamics, we are conducting numerical simulations of the convective motions in the mantles of the Earth and terrestrial planets, together with the developments and/or improvements of simulation tools for the advanced numerical experiments in the planetary interiors.
These simulations are utilized to study how the the nature of convecting flows is affected by the distinct fluid-dynamical properties of mantle materials, such as solid-state phase transitions, strongly variable viscosity, compression under high pressure and so on.

Minerals often record various information in their microstructures, which are valuable to infer the formation process and physicochemical conditions under which they crystalize. We investigate such mineralogical features (e.g. microtexture, crystal structure, chemical properties, crystallographic orientation) of synthetic (and sometimes natural) minerals/materials formed under high pressure and high temperature using electron microscopy to understand the physics and chemistry behind their crystallization process. Recently, we have positively applied this approach also to material science studies. For example, our studies demonstrate that the phase transition mechanism and microtextures of nano-polycrystalline diamond (NPD) synthesized by direct conversion are largely influenced by the crystallinity of the graphite starting materials. That is to say, the microtexture of NPD can be controlled by choosing graphite sources with different crystalline states, as shown in the xxx figure 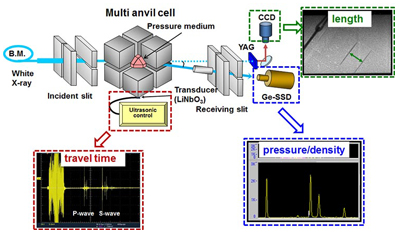 Based on the state-of-the-arts technologies in ultrahigh-pressure experiments, using both large volume press (LVP) and diamond anvil cell (DAC) combined with synchrotron radiation, cutting-edge studies are being pursued on the phase transitions, melting relations, element partitioning, density and sound velocities, etc., of the Earth’s mantle and core materials, as well as those in subducting slabs and in materials relevant to exo-terrestrial bodies. The goal of this group is to address the evolution and dynamics in the Earth’s and planetary deep interiors. 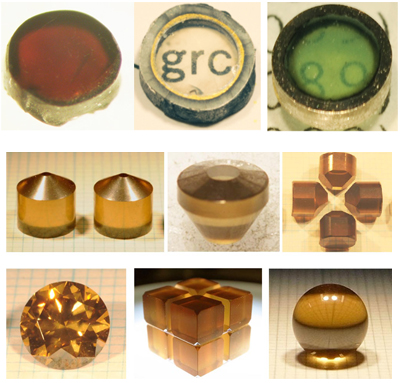 Using high-pressure technologies and devices developed at GRC, syntheses of novel functional materials are being performed. One such example is ultrahard sintered nano-polycrystalline diamond (NPD or Hime-diamond), originally synthesized by GRC. NPD rods with dimensions up to 1 cm (~15 carats) can now be produced with a 6000-ton multianvil apparatus (BOTCHAN-6000) on a routine basis, which are used for various studies in high-pressure sciences. This group is intensively making international collaborations with groups not only in geosciences but also in other research fields, such as physics, chemistry, and materials science.